This press release can be viewed in its entirety here

Governor Greg Abbott and the Texas Music Office announced that the Sounds & Cities Conference will be held Thursday, September 9 and Friday, September 10 in Arlington Texas. Co-hosted by the Texas Music Office, Levitt Pavilion Arlington, and the Arlington Convention & Visitors Bureau, the two-day music conference will include panel discussions on Texas music scene development and conversations about potential statewide collaboration between the certified communities, as well as spotlight economic development best practices that lead to increased music tourism, job creation, and music scene cohesion.

“Music is a big part of the Texas brand,” said Governor Abbott. “A vibrant music industry in communities across Texas not only adds to the quality of lice, it is a competitive advantage, helping the Lone Star State to attract major capital investments, culturally diverse talent, and new jobs across industries. I thank the Texas Music Office and our Music Friendly Communities for sharing their knowledge and joining the conversation on continued economic expansion strategies for local music businesses, musicians, venues, and the music industry across the state.”

This press release can be viewed in its entirety here

After a year when there was change around every corner, an exciting new change has happened in Downtown Arlington at the Levitt Pavilion.

In 2017, just before Texas country music singer/songwriter Jack Ingram took the stage for an October concert at the Levitt, Baylor Scott & White Orthopedic and Spine Hospital CEO Alan Beck presented a check to the Levitt Pavilion for $500,000. Baylor’s check 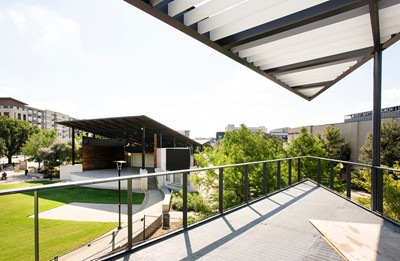 was matched by the Arlington Tomorrow Foundation with the goal to build something the Levitt had needed since it opened 12 years ago — permanent restrooms.

With $1 million in the bank, the Levitt Pavilion’s board of directors and staff began 2018 with a capital campaign to make the facility’s restrooms a reality. In looking at the possibilities and thinking about the future, a hospitality suite was added above the restrooms. The Levitt concluded its 2018 concert season with a ceremonial ground-breaking for the project, and construction began the day after the 2019 summer concert season ended. 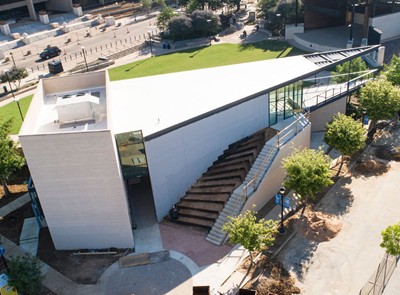 “The architectural design and versatility of the new hospitality suite makes the project a true show-stopper,” said Letatia Teykl, executive director of Levitt Pavilion Arlington. “It can be configured for a business meeting, workshop, wedding reception, cocktail party – you name it! We are ready to activate the lawn and facilities on a year-round basis.”

During Levitt concerts, sponsors will have priority in using the suite for hosting their own private events. During a concert, if the suite isn’t being used, it can be rented by anyone for a private party. When it isn’t concert season, the hospitality suite is available for rent by itself or as a package with the Levitt stage for fundraisers, festivals and events, increasing how the Levitt is used year-round.

“We are so excited about the possibilities that the new Baylor Scott & White Orthopedic and Spine Levitt Center will bring!” said Josh Hankins, Levitt Pavilion Arlington’s board chair. “We feel that it’s going to be a key element to add to the sustainability of our concert series, as well as our mission to build community in Arlington. The center will allow us to host additional sponsors during the concert seasons, but most exciting is that it will allow us to better utilize the facilities and lawn year-round.”

The hospitality center was designed by architects Ibanez Shaw with construction by J. Hutcherson Construction. Bart Shaw, architect, said the most challenging aspect was how to maximize the space and provide a facility that would be a showcase and enhance the vibrancy of downtown Arlington.

“The idea of putting a hospitality suite on top of a restroom building was tricky,” he added. “We needed to maximize the space on that corner and yet meet all the needs of the facility. What separates this project from others is the type of project – putting a finished space on top of a park restroom.”

Shaw designed the Levitt Center to enhance the look and feel of the Levitt stage and add to what he calls “the energy and drama” of the lawn. During concerts, that translates into taking a concert night and adding spectacular ambiance for listening to live music or hosting an event. It gives businesses and organizations a new option for meetings, retreats, workshops and receptions. Coupled with the new restrooms, it adds to the Levitt’s appeal as the site for fun runs and 5Ks, fund-raisers, events, and festivals.

“The Levitt Pavilion has been a destination for many Arlington and surrounding area residents and visitors. We all have great memories of our favorite concerts there,” said Arlington Mayor Jeff Williams. “The new Levitt Center will only enhance the Levitt Pavilion and the city’s state-designated Cultural Arts District, making Downtown Arlington even more appealing to those organizing festivals and events.”

“We cannot wait for everyone to see all that the Levitt Center has to offer,” added Teykl. “We’re proud of the new addition to the Levitt Pavilion and the potential that comes with a facility of this caliber in the Downtown Arlington Cultural Arts District.”