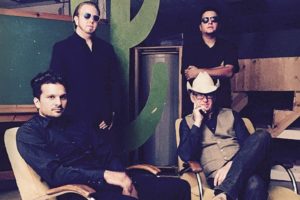 Americana with a Texas twang

Before there was Americana or Texas country, Two Tons of Steel front man, Kevin Geil, and his original band, Dead Crickets, rocked a sound that blended the best of musical worlds and pushed the envelope of Texas sound with a signature brand of country meets punk. The San Antonio-based group packed small bars and local hangouts and quickly became the Alamo City’s most-loved band, earning them a spot on the cover of Billboard magazine in 1996. It was the beginning of a 22-year journey for Kevin and the four-piece ensemble. Along the way, the band has collected a number of awards, including San Antonio’s Band of the Year 12 times and named Best Country Band 10 times by the San Antonio Current. Two Tons of Steel’s reach extends beyond their live gigs. The band was filmed for the IMAX film, Texas: The Big Picture, which can be seen daily at the IMAX Theatre in the Bob Bullock Texas State History Museum in Austin. They also have played the Grand Ol’ Opry and are featured in several Texas Tourism commercials, including the opening scene for Austin City Limits. Their most recent project, Gone, produced by Lloyd Maines, was released in 2017.