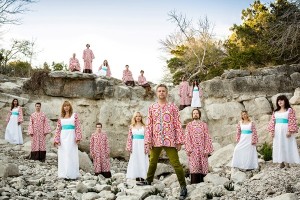 Fresh off their 15th anniversary tour, The Polyphonic Spree returns to the Levitt with their unique Texas psych/pop music experience. In 2000, the Spree began as Tim DeLaughter’s desire to hear a sound he dreamed about before most of the bands that they have been compared to were formed. Since they began, the Spree has circled the globe several times over, appeared at every major music festival and on every late night television program, and performed at the 2004 Nobel Peace Prize Concert. The Polyphonic Spree has ranged in size from 13 to 27 members and released four full-length recordings, including a 2012 holiday recording. Their 2013 appearance at the Levitt was just days before releasing their most recent recording, Yes, It’s True, which was their first studio album of original material since 2007.