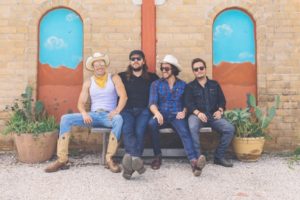 A hard-scrabble package of folk, rock and bluegrass

You can tell a lot about a group of musicians by the name they give themselves. The Dirty River Boys make music with the type of sound and texture that’s soaked in the realities of the hard-scrabble city of El Paso that they call home in the far west Texas desert. Playing more than 200 dates a year, giving heartfelt, unrestrained performances, and winning over a loyal audience show by show, it takes a lot to stop them. It was against this backdrop and the “dirty river” also known as the Rio Grande that Nino Cooper, Marco Gutierrez and Travis Stearns came of age, playing music in various bands and dreaming of recording at Sonic Ranch. Fast forward a decade or so, and Nino had returned to El Paso from Southern California, where he’d abandoned a corporate career. Armed with an acoustic guitar and an armload of originals and covers, he began playing anywhere that would have him, including restaurants and hotel lobbies. Travis quickly jumped on board to provide percussion, but venues weren’t crazy about a loud drum kit. So he dropped the kit and picked up the cajón, a simple, box-like instrument that’s common south of the border. Marco, a veteran of a number of local bands, soon rounded out the trio, and gigs in hotels and restaurants soon became bookings in El Paso’s handful of live-music clubs, which after a while led to trips out of town. Along the way, The Dirty River Boys notched a number of significant milestones – opening for Texas legend Willie Nelson several times and selling out the famed Gruene Hall in New Braunfels. After leaving the El Paso restaurants far behind, the band continued to grow and function a bit more like a conventional rock band. All four band members have a hand in the songwriting, and all four sing as well, while members often switch off instruments during shows. Their shows feature winning four-part harmonies and stout acoustic instrumentation. Harmonicas and fiddles cut melodies that blend with furious licks spilling from guitars and mandolins alongside explosive percussive rhythms all combined to create a whirling dervish of musicality.