The Band of Heathens 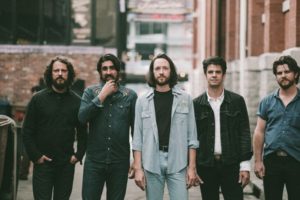 Rock-and-roll that doesn’t play it safe

Sometimes it’s the happy accidents rather than elaborate plans that lead to something lasting, and that’s precisely the case with award-winning Austin rock-and-roll stalwarts, The Band of Heathens. The band has succeeded for more than a decade, racking up 10 albums and more than 1,200 performances in 13 countries. They have had a few personnel changes along the way, but one thing has remained constant – making timeless music. The Band of Heathens’ first two releases were live recordings and the funky, soulful, rootsy sounds would become the band’s hallmark. Between 2008 and 2016, The Band of Heathens released five studio albums, four of them going to either number one or number two on the Americana Radio Albums chart and earning a pair of Americana Music Awards nominations. Then in 2018, they released the acclaimed A Message from the People Revisited, a re-creation of the legendary 1972 Ray Charles album, A Message from the People. Also in 2018, the band purchased The Finishing School, a studio in Austin where the band had frequently worked to have access to a creative workspace. The band has recorded about 15 new songs over the last several months with plans for a selection of them to be on a new album this year.

The Band of Heathens’ music

Become A Sponsor
Home > Events > The Band of Heathens