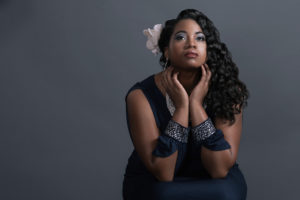 Refreshing and beautiful are how many have described the voice and persona of Tatiana “LadyMay” Mayfield, a jazz vocalist, musician, composer, and educator from Fort Worth, Texas. “LadyMay” (as she has been named) has been singing and playing jazz music since the tender age of thirteen. Since then, she has performed in various venues and festivals throughout the U.S. and abroad, which in turn have earned her rave reviews from listeners and musicians in addition to numerous awards. In 2017, “LadyMay” was awarded 2nd place in the Sarah Vaughan International Jazz Vocals Competition held at NJPAC in New Jersey. In the summer of 2019, the city of Fort Worth awarded her with a “Legend In The Making” award at their annual “Dr. Marion J. Brooks Living Legends Awards” for her accomplishments in entertainment and education. Mayfield has opened for several well-known artists such as Kirk Whalum, Will Downing, Randy Brecker, Dave Valentin, Bobbi Humphrey, and The Main Ingredient. “LadyMay” has recorded three albums, From All Directions (2009), A Portrait Of LadyMay (2012), and The Next Chapter (2018). In addition to her vocal skills, she plays piano, trombone, composes, and teaches voice and music theory. In addition, she contributed an article to the ISJAC (International Society of Jazz Arrangers & Composers) about her experience as a black woman composer and performer, earning a master’s degree during a pandemic, and being the first African American person to receive a master’s degree in Jazz Composition at the University of Texas at Arlington.