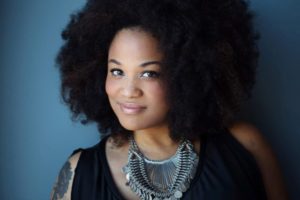 The Queen of Austin Soul

When Austin native Tameca Jones opens her mouth and sings, jaws hit the ground. Her honey-smooth powerful vocals have been captivating her hometown for more than a decade. She started with Austin-based band, 8 Million Stories, as the group’s lead singer and songwriter. Tameca was part of the band for more than two years when the band called it quits. This left her without someone to help her create original music. So, she turned to covers to continue playing, grow her audience and pay the bills. Tameca spent years skillfully breathing new life into the music of others and made a name for herself as the “Queen of Austin Soul,” blowing minds with her vibrant interpretations of a diverse list of artists, including Tina Turner, Nirvana, Elton John, Jimi Hendrix and more. The Austin Chronicle called her interpretations “sonic pretzels” that “juxtapose(s) crunchy jaggedness with her infectious, honeyed voice.” Tameca made her festival debut at the 2015 Austin City Limits Festival. Austin360 wrote that her “big, sweet, soulful voice” kicked off the festival in the most epic of ways. She ended her set with her debut single, “Hot and Bothered,” a Motown-inspired cut that’s available on Spotify and iTunes. Tameca has opened for Austin super stars Gary Clark Jr., Max Frost, Bob Schneider and other big touring acts. She received major love from Billboard magazine for her white hot performance at the 2015 Austin Music Awards, where she paid tribute to late beloved musician, Ian McLagan, alongside legends like Steven Van Zandt, Charlie Sexton, Alejandro Escovedo and Patty Griffin. Guitar deity and fellow Austinite, Gary Clark Jr., who faithfully attended Tameca’s shows whenever he was in town, asked her to sing on the song “Wings” for his latest album, The Story of Sonny Boy Slim. Tameca’s EP, Naked, was released in 2016.