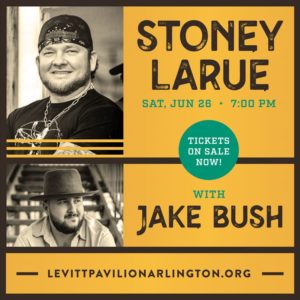 The Stoney LaRue show requires a ticket purchase. Proceeds from the concert will help Levitt Pavilion Arlington present more than 50 FREE concerts and events throughout the year. For this concert, please do not bring food, beverages, coolers or pets. No one will be admitted to the concert with any of these items. Concessions will be sold at the concert, including beer and wine.

Throw away any preconceived notions you might have about country singers — especially ones from Texas — because Stoney LaRue smashes them all. Over a nearly 20-year career, the Lone Star-born and Oklahoma-raised LaRue has transformed himself into an unlikely Renaissance man. He is a deft songwriter, informed traveler and self-aware philosopher, a troubadour who converses just as easily about Indian yogis and gurus as he does about Texas barbecue and dance halls. LaRue highlights all facets of his complex persona on the inspiring new album Onward. While the bulk of Onward exists in that musical sweet spot of rock and twang for which LaRue has become known, a pair of songs evoke a more Dixieland vibe.

With over 220 shows this past year, Jake Bush is setting course a course for the Texas Country Music Charts. Born and raised on traditional southern values mixed with a little Gulf Coast seawater gives way to his unique sound and style of traditional Texas Country music.

The Levitt has taken health and safety precautions to help make your visit to the lawn as safe as possible. Antibacterial stations are located by the restrooms and throughout the concert area. A cleaning crew will sanitize the bathrooms before, during and after concerts. Please do not attend the concert if you are not feeling well, have a temperature of 100 degrees or higher, or have been exposed to COVID-19.