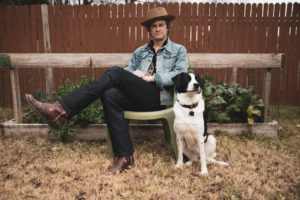 A stew of early country, gospel, and the best of classic Nashville

Born in rural Indiana, Simon Flory’s music is suffused with the elements of his childhood – days spent in the fields, church sings, gravel roads, and genuine mule-drawn molasses. It takes a perceptive ear to translate these icons of a mythical “Americana” into the daily textures of real human lives, and Flory does it with the sincerity of early country music. His compositions are as many short-story sketches as they are songs, each populated – like the locales that inspire them – with those among us who have few choices. Flory’s sound evokes voices not much heard on radio airwaves, a stew of early country, gospel, and the best of classic Nashville. His first solo record, self-released Unholy Town, led him to Austin, TX where he continued to work as a solo performer and eventually moved to Fort Worth, TX. His most recent releases, 2019’s Radioville and 2020’s Songs From Paper Thin Lines garnered local acclaim, as did his poetry film, Paper Thin Lines which was officially selected in the Thinline Music and Film Festival and the PressPlay Film Festival.