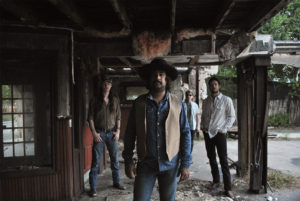 Shaker Hymns is a crowd favorite in any honky-tonk, dance hall, and juke joint. Coming from humble beginnings around the state of Texas, Shaker Hymns formed in San Marcos and immediately saw success after winning 3 battle of the bands contests and sharing the stage with national-level acts. The 5-piece band’s loud stage presence of three electric guitars draws them immediate comparisons to bands like Lynyrd Skynyrd and Led Zeppelin. However, lead singer and primary writer, Nyles Robakiewicz is not afraid to slow things down and pull out the acoustic and sing some more intimate songs influenced by his likes of Jason Isbell and Ryan Bingham. Shaker Hymns released a full-length LP in 2020 produced by Josh Serrato and Ben Hussey.