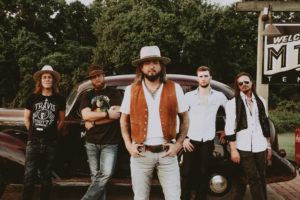 Scooter Brown Band was formed and began playing mainly in and around Houston, Texas. They have toured North America and opened for some of their biggest influences including Charlie Daniels Band, Travis Tritt, Dwight Yoakam, Lee Roy Parnell and the Marshall Tucker Band, just to name a few. Two members having served in the military, they dedicate significant time doing work for Veteran Support Organizations like Base Camp 40 – Warriors in the Wild, Lone Survivor Foundation, and the Chris Kyle Frog Foundation. For the last few years the band has been building a new era in their career. Defined as modern southern rock, the band released American Son in late 2017 and was named in Artists to Watch by Rolling Stone. In July 2019 the group made their debut on the Grand Ole Opry stage, introduced by fellow road warrior, Opry-member Charlie Daniels. The band has continued a rigorous touring schedule while writing with some of the biggest songwriters in Nashville.