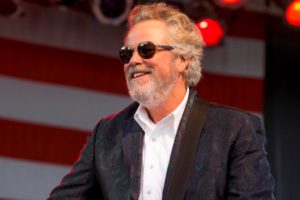 The road goes on forever, and the party never ends!

The Robert Earl Keen concert requires a ticket purchase. Tickets are on sale by clicking Buy Tickets below. Tickets are $35 for general admission (VIP tickets are SOLD OUT!). For this concert, chairs will be provided and concessions will be sold, including beer and wine. Ticket holders are asked to not bring chairs, coolers, outside food or beverages, or pets.

Three decades after the release of his debut album, No Kinda Dancer, with 18 recordings to his name and thousands of shows in his rear-view mirror, Keen has blazed a peer-, critic- and fan-lauded trail that’s earned him living legend status in Americana music and at home in Texas. He is a member of the Texas Heritage Songwriters Hall of Fame along with the late Townes Van Zandt, who Keen has toured with, and his longtime friend and fellow Aggie, Lyle Lovett. A short stint in Nashville earned Keen a publishing deal, a label and a national booking agent, but it was 1989’s West Textures album, and the debut of “The Road Goes On Forever” in particular, that kicked his career into high gear. His literate songwriting and razor wit created a grassroots following for instant classics like “Corpus Christi Bay,” “Whenever Kindness Fails,” “Gringo Honeymoon,” “Dreadful Selfish Crime” and “Merry Christmas From the Family.” In 2015, Keen ventured into bluegrass territory with Happy Prisoner: The Bluegrass Sessions, and emerged as Billboard magazine’s number two Bluegrass Artist of the Year. The recording was in 2015’s top five at Americana Radio and second on Billboard’s Bluegrass Albums chart. Keen has worked with Dave Matthews, Bonnie Raitt, Sheryl Crow, Eric Church and Gary Clark Jr. and has appeared on Austin City Limits. In 2015, he received the first official BMI Troubadour Award. Last fall, Texas Monthly magazine described Keen by saying, “From tales of romance on the Rio Grande in ‘Gringo Honeymoon,’ to the humor and dysfunction of the holiday season in ‘Merry Christmas From the Family,’ Keen writes of Texas and Texans with wit, tenderness, and an acuity typically reserved for Pulitzer Prize-winning novelists such as Larry McMurtry.” Keen’s newest double CD, Live Dinner Reunion, revisits Keen’s best-selling 1996 recording, Live No. 2 Dinner. The refreshed version features special guests Cory Morrow, Cody Canada, Bruce Robison, Joe Ely, Cody Braun, and Lovett, who co-wrote “The Front Porch Song” with Keen for Live No. 2 Dinner.

Join us on the lawn!


There is limited seating available for this concert. To attend, you can reserve one space by clicking here. You may two to eight people in your space (the people in your square should be family members). You must show proof of your reservation with your printed ticket or your ticket on your phone at the gates to enter the lawn. Everyone in your square must also have proof of your reservation to be admitted. Seating is in socially distanced squares marked on the lawn. Squares are first-come, first-served. You can reserve one square only. Gates open at 6:15 p.m. Opening artists begin at 7 p.m., followed by the headliners at 8 p.m. You must wear a mask to enter the lawn. Once you are in your square, you can remove your mask to eat and drink. You must wear a mask any time you leave your square. Once the concert is over, please leave the lawn as quickly as possible. While at the Levitt, please stay a socially distanced 6 feet away from Levitt crew, staff, artists and volunteers. Please bring your own food, beverages, chairs and blankets. No glass containers, please. Parking is free. For directions to the Levitt, please see Directions & Parking.

For your health and safety


The Levitt has taken required health and safety precautions to help make your visit to the lawn as safe as possible during the ongoing COVID-19 pandemic. Antibacterial stations are located by the restrooms and throughout the concert area. A cleaning crew will sanitize the bathrooms before, during and after concerts. Please do not attend concerts if you are not feeling well, have a temperature of 100 degrees or higher, or have been exposed to the virus. Thank you for following safety protocols of social distancing and wearing a mask. Stopping the spread of COVID-19 is up to all of us.