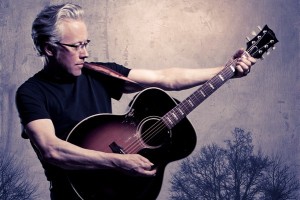 The position that Radney Foster enjoys in the country music landscape is remarkable. For 30 years, Radney has thrived as a songwriter, recording artist, live performer and producer. His songs, solo and recorded by other artists, have topped the country, Americana, and AAA charts alike. At the same time, he’s earned the respect of his peers and a devoted audience as intent on listening as they are eager to dance. Radney grew up in two worlds: herding cattle on horseback at his grandfather’s East Texas ranch in the summer and hunkering over a transistor radio in his West Texas hometown, listening to border radio that played country to conjunto. That hybrid of influences may be why Radney has always been tough to categorize. His first success was with the seminal country/cowpunk duo Foster & Lloyd, whose first single, “Crazy Over You,” went straight to number one. His subsequent solo albums told tales through a honky-tonk lens and yielded enduring hits, “Just Call Me Lonesome” and “Nobody Wins.” Considered an elder statesman of Texas singer/songwriters, Radney has written and produced songs for Randy Rogers, Jack Ingram, Kacey Musgraves, Wade Bowen, Josh Abbott, Pat Green, Cory Morrow and many others. His songs are regularly mined by superstar acts like Keith Urban (“Raining on Sunday,” “I’m In”), Sara Evans (“Real Fine Place,” “Revival”) and the Dixie Chicks (“Godspeed”). Radney has performed with Charley Pride and Asleep at the Wheel and performed at the Black Tie & Boots Inaugural Ball in Washington, DC, during President Obama’s inaugural festivities.