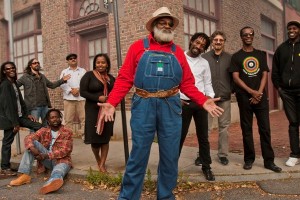 The drum circle is a fun community music-making event open to everyone, no experience required! Arrive early, as the first 250 people will receive a FREE Remo Sound ShapeTM (a mini-drum that is perfect for children of all ages) to take home!

9:30 p.m. Artist Q&A
Stick around after the show for a lively on-stage interview with members of the Playing For Change band, who will share their inspiring personal journeys as well as insights on building a world movement for peace through music.

The inaugural Levitt National Tour will feature critically acclaimed World music sensation Playing For Change. Co-founded in 2005 by GRAMMY-winning producer Mark Johnson and Whitney Kroenke, Playing For Change is dedicated to positive social change through the universal language of music. Comprised of musicians hailing from six countries, representing four continents, the Playing For Change sound is a fusion of global influences.

Playing For Change began with a small film crew and a mobile recording studio. Its breakthrough moment came in 2009, when its video of musicians performing the song “Stand by Me” went viral. In it, musicians separated by thousands of miles across the world were united through the shared experience of creating music. The video became an instant YouTube sensation, and to date, it’s been viewed 60 million times. It was the first of many “Songs Around the World” posted on YouTube by Playing For Change that have attracted viewers in the millions.

Playing For Change recordings feature the talents of hundreds of artists including U2’s Bono, Keb Mo’ and Manu Chao, among others. The band has appeared in concert and on recordings with such celebrated artists as Jackson Browne, Taj Mahal, Patti Smith and Vusi Mahlasela. Playing For Change has performed at legendary venues and festivals in Europe, the United States and Canada, Japan, Latin America, and Africa.