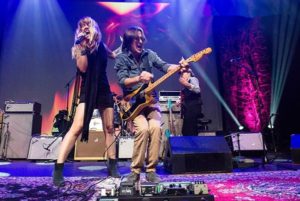 Explosive mix of rock and soul

Patrice Pike burst on to the music scene as the electric front woman for the Austin jam band Little Sister/Sister Seven. Soon after, she co-wrote and sang Sister Seven’s top 10 Billboard hit “Know What You Mean.” Richard Skanse for Rolling Stone called her “Tina Turner, Bessie Smith, Janis Joplin and Robert Plant all rolled up into a tiny but explosive package.” Billboard magazine has called her “One of the best up and coming contemporary rock singers in America.” After Sister Seven disbanded, Patrice began her solo career with her album, Fencing Under Fire, which landed in the top 10 most added on AAA radio for multiple weeks. Her solo material took an increasingly narrative turn, while her sound has moved steadily in the direction of an eclectic mix of rock and soul topped with a tinge of world music flavor. Patrice effortlessly moves from tightly woven rhythm guitar to a drum kit on stage while never dropping a beat of her fierce but silky lead vocals. Over the past decade she has independently released five critically acclaimed solo records, showcasing her socially astute, literate lyrics alongside her powerful vocals. She has toured relentlessly, both in the United States and abroad, building an impressive grassroots fan base. In 2007, she became the youngest member of the Austin/Texas Music Hall of Fame, inducted alongside Lucinda Williams. The resilient Patrice has been able to adapt repeatedly to a rapidly changing music landscape that bears no resemblance to the one she entered in her teens. She continues to grow and evolve as both a songwriter and a performer. A long-time respected social and environmental activist, Patrice is the co-founder of the Step Onward Foundation (formerly Grace Foundation USA), an organization that provides services for young adult survivors of homelessness. Twenty years into her musical career, she’s much more than one of the most dynamic live performers in the world, she’s also an artist of substance with a compelling life story that is only beginning to unfold.