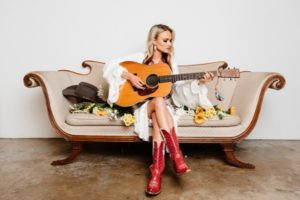 We’re celebrating North Texas Giving Day with a full day of live-streaming music!
Join us on Facebook Live at 3 p.m. for Bri Bagwell right in your living room!

Earthy Texas music with a little bit of sass

A contemporary country artist with a honky-tonk heart and a romantic streak, Bri Bagwell is one musician who has done it on her own! She works without a manager or a record contract, earning fans through extensive touring and her independently released recordings. After high school, Bri moved to Austin, where she studied marketing at the University of Texas. She began performing at local clubs in her spare time and started to make a name for herself in one of the busiest markets for live music. After college, Bri put her focus squarely on her music, and in 2011, she became a contestant on Country Music Television’s Next Superstar, a televised talent competition for country artists that introduced her to a larger audience. Bri was named Female Vocalist of the Year by the Texas Regional Radio Music Awards in 2013 and 2014. In 2015, Bri released her second full-length album, When a Heart Breaks, that included the song “My Boots,” which became a breakout single in Texas. Her most recent album, In My Defense, was released last year and includes the single, “If You Were a Cowboy.”