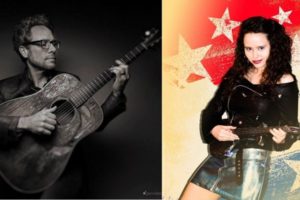 We’re celebrating North Texas Giving Day with a full day of live-streaming music!
Join us on Facebook Live at 1 p.m. for Brad Thompson and Hannah Kirby right in your living room!

Rock to knock your socks right off

They met at the Levitt while both were performing for Light Up Arlington!, and the rest is local music history! Brad Thompson’s musical roots started at an early age when his mom handed her guitar to 12-year-old Brad. As a student at the University of North Texas, Brad pursued music full time, writing and performing at clubs like The Hop in Fort Worth, Poor David’s Pub in Dallas, the Kerrville Folk Festival and other havens for young songwriters. Brad went solo in 1992 and has recorded seven CDs. His songwriting and performances show the influences of Michael Hedges, Lyle Lovett, Jeff Buckley, Toad the Wet Sprocket and Counting Crows. Hyper-stylized but incredibly honest, Hannah Kirby’s classic rock influence mixes with a taste of early soul and blues to give her a sound that screams rock ‘n’ roll. Hannah’s powerful voice never overwhelms, but melts you instead, like honey and butter on a hot biscuit. Since finishing in the top eight on The Voice’s eighth season and winning the 2018 Texas Local Live Singer/Songwriter contest with her original music, Hannah’s goal is simple: Make people feel good through her music.