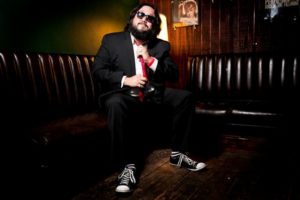 The blues the way it was meant to be

Before he was on The Voice, Nakia was a blues grifter, the age-old concept of stealing from the greats. When Nakia formed The Blues Grifters in 2010, the band quickly became a hit on the club circuit in Austin performing at the legendary “Home of the Blues,” Antone’s, and the south Austin hot spot, C-Boy’s Heart & Soul while recording their first album. A video of Nakia’s full-throated, soulful performances found its way to television producer Mark Burnett, who insisted on recruiting Nakia for a new show. Reluctant, but hopeful, Nakia put the band and the album on pause to go to Hollywood. On the first season of The Voice, Nakia became a fan favorite before finishing as a semifinalist. More than 14 million viewers tuned in each week to witness Nakia wowing the show’s four celebrity coaches with his electric stage presence and gritty voice. After the whirlwind of reality TV, Nakia focused on writing songs for a new EP and subsequent tour, still leaving the band on hold. Nakia knew it was time to call up the Blues Grifters again when he was invited to appear on the ALL ATX compilation album in 2016. Renewed from their studio experience, Nakia was ready to finish the album he started almost a decade ago with his long-time collaborator and fellow Grifter, Mac McNabb. In addition to being a semifinalist on The Voice, Nakia is a two-time Black Fret artist grant award recipient.