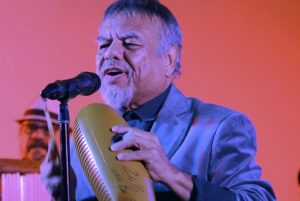 After 50 years in music, Little Joe y La Familia remains one of the most popular Tex-Mex bands in music. Described as “King of the Brown Sound,” Jose Hernandez (Little Joe) helped pioneer Tejano music, a mix of traditional “norteno” music and country, blues and rock styles. The seventh child of 13 from Temple, Little Joe was recruited when he was 13 to play guitar for David Coronado & the Latinaires. Five years later, he made his recording debut, then took over the band, renaming it Little Joe & the Latinaires. Joe went on to create his own independent record labels for both Spanish-speaking and English recordings and win four Grammy Awards and one Latin Grammy Award. He has toured around the world and was the featured artist for Governor Ann Richards’ inaugural ball. He has performed at the Kennedy Center and for Willie Nelson’s Fourth of July picnics. In 2001, Little Joe was honored with a Lifetime Legend Award from the Smithsonian Institute and remains a legend of Tejano music today.