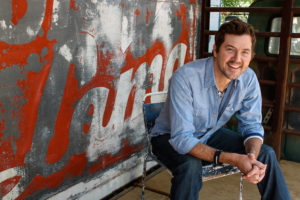 Join us on Facebook at 8 p.m. for a live-streaming concert right in your living room!

Possible limited seating for this concert will be announced Sept. 29 through an email and on our social media. If you are not on our email list, please return to the home page and subscribe

The Ray Johnston Band has built a solid foundation over the years based on melodies and lyrics that always seem to lean on the positive side of life. Having more than five years in remission from leukemia will definitely put things into perspective for pretty much anyone, and the new lease on life has never been lost on Ray who utilizes both his charity work and his music to spread the love and shed light in the darkness wherever he finds it. His previous album, No Bad Days, not only put Ray on a much larger map as a genuine songwriter and artist, but also stands as a shining example of how much music fans gravitate to his special brand of happy. Ray imparts more of those buoyant vibes with the release of his new EP, #GoesGoodWith, inspired by his engagement with fans and social media presence. Before COVID put us all on pause, Ray played more than 120 shows a year, including headlining gigs at the House of Blues in Dallas and the legendary Gruene Hall in New Braunfels. He also had seven singles on the Texas Music Chart, over a quarter of a million streams online and national exposure garnered from songs co-written with a significant company of peers. His music has been on the ABC hit drama Nashville, and the Netflix series, The Ranch, starring Ashton Kutcher, Debra Winger and Sam Elliott. At his core, Ray is all heart, and his music reflects it.