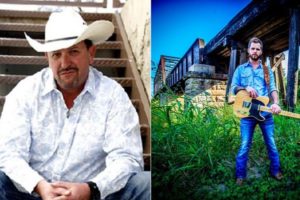 Join us on Facebook Live at 8 p.m. as two local country artists swap songs for a concert right in your living room!

We hope you’ll make a donation to help the Levitt survive the losses of the pandemic. Without being able to “pass the bucket,” the Levitt needs your help now more than ever to ensure that free music is there when we can return to the lawn!

Aaron Copeland grew up in Corsicana, where he learned to play guitar and piano at a young age and quickly began winning competitions. As a teenager, he played honky tonks with his dad and brothers. When he was 20, he secured a position with the Casey Donahew Band playing keys and guitar, singing harmony vocals, and eventually co-writing songs for the band with Casey Donahew. Aaron stayed for six years, learning the ins and outs of the touring world. Aaron then joined Sam Riggs and the Night People, where he continued to fine tune his skills and build a growing fan base. Although he enjoyed every minute with his previous bands, Aaron felt the time was right to branch out on his own. Now based in Fort Worth, Aaron has debuted his first EP.

Steve Helms is proud to say, it’s been 10 years since he released “Nowhere But Texas!”  The single, now known as a new-found Texas anthem, can be heard playing loud and proud at sporting events and the Lone Star Park horse races. It’s also the name of a beer at Arlington’s own Legal Draft! “Nowhere But Texas” hit both the Texas Music Chart and Texas Regional Chart at number 10. Steve’s latest song, “The Spirit Lives On,” perfectly captures what is happening in our world right now and pays tribute to our health care workers and first responders.