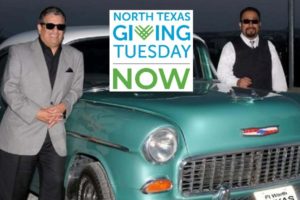 Join Latin Express on Facebook Live  or Instagram Live for a concert right in your living room!

Anytime during the day, from 6 a.m. to midnight, we hope you’ll consider making a donation to support free music during North Texas Giving Tuesday Now — with fewer concerts and fewer times to “pass the bucket,” the Levitt needs your help now more than ever!

Latin Express got its start in Fort Worth when Carlos Saenz and the members of the North Side High School Spanish Club needed money to take a group trip to Six Flags. They had a concert at school, charged 50 cents a person (this was 1974) and earned enough money to go to Six Flags, buy everyone a T-shirt and food, and still had money left to leave to the next year’s Spanish Club. From that humble beginning, Latin Express was gone on to record three CDs, play at the 2001 Presidential Inaugural ball in Washington, DC; earn an array of music awards, including the Little Joe y La Familia Lifetime Achievement Award; and be inducted into the Tejano Roots Hall of Fame.