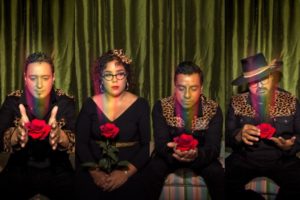 La Santa Cecilia exemplifies the modern-day creative hybrid of Latin culture, rock and world music. The group draws inspiration from all over the world using Pan-American rhythms,  including cumbia, bossa nova, rumba, bolero, tango, jazz and klezmer music. Their unique sounds and colorful, passionate performances continue to captivate both loyal fans and new listeners. Named after the patron saint of music, La Santa Cecilia includes accordionist and requinto player, Jose “Pepe” Carlos, bassist Alex Bendaña, percussionist Miguel “Oso” Ramirez, and vocalist “La Marisoul.” With a captivating voice that sings about love, loss and everyday struggles, the band has become the voice of a new bicultural generation in the United States, fully immersed in modern music, but always close to their Latin American influences and Mexican heritage. La Santa Cecilia released their debut album, Noche y Citas, in 2011. The album was nominated at the Latin Grammy Awards for the single, “La Negra.” In 2012, El Valor was named one of the best albums of the year by NPR’s Alt Latino. In 2013, Treinta Días was released and went on to win the Grammy for Best Latin Rock Album Alternative or Urban. In 2016, Buenaventura was nominated for a Latin Grammy in the Best Pop/Rock Album category and a Grammy in Best Latin Urban Rock or Alternative. Their seventh self-titled album was released last year, and they are currently working on an album for this year. They have performed more than 100 shows a year, collaborated with artists ranging from Elvis Costello to John Paul Jones, and their music has been featured in movies (Coco, The Book of Life) and television series (Weeds, Entourage, The Bridge) and was the theme song for the Netflix series, Ingobernable.