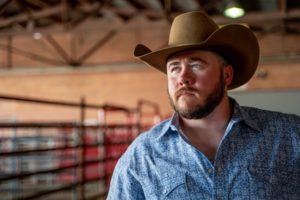 Join us on Facebook at 8 p.m. for a live-streaming concert right in your living room!

Possible limited seating for this concert will be announced Oct. 13 through an email and on our social media. If you are not on our email list, please return to the home page and subscribe.

Since the release of his second studio album, Promises, and his latest studio album, Holding Me Together, Houston native Josh Ward has amassed seven consecutive number-one hits on the Texas Regional Radio Chart in just two years, distinguishing him as a new generation, heavyweight champ of old-school country music. Through tenacity and hard work, Josh has grown into one of the most respected and appreciated musicians in the state. A well-versed songsmith with a hauntingly traditional voice, his honest and visceral delivery of every song compels audiences to feel his lyrics with him as he takes them on a musical journey. Josh found his voice singing old gospel hymns in church as a child. In high school, while riding in the rodeo circuit, he discovered Willie, Waylon, Merle, Jones and Strait and was inspired to pick up a guitar and start singing in the parking lots of rodeo events. He hit the honky-tonk circuit in 2003 and recorded his first EP, Hard Whiskey. In 2012, Josh truly found his stride with the release of his first full-length album, Promises, produced by Grammy Award-winning producer, Greg Hunt. Radio discovered a new banner artist with all five singles hitting the Top 20 on the Texas Music charts, three of those at number one. Josh wrapped up 2013 as Texas Regional Radio’s New Male Vocalist of the Year. Josh’s third full-length album, Holding Me Together in 2015, had all four singles going to number one on the Texas Regional Radio chart.