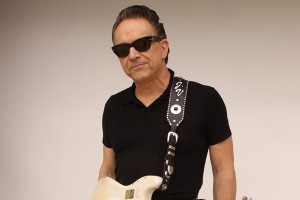 Jimmie Vaughan’s free concert is a special Thursday concert for Arlington GIVES! North Texas Giving Day. Join us at 7 p.m. before the concert for food trucks, a showcase of Arlington charities, special grant presentations and your chance to vote for your favorite charity to win a People’s Choice grant!

Jimmie Vaughan is far more than one of the greatest and most respected guitarists in the music world and a three-time Grammy winner. As Guitar Player magazine described him, “he is a virtual deity — a living legend.” After all, Jimmie provides a vital link between contemporary music and its proud heritage, as well as being a longtime avatar of retro cool. Throughout his career, Jimmie has earned the esteem of his legendary guitar-playing heroes and superstar peers along with successive generations of young players. His musical ethos and personal style have had an impact on contemporary culture, from spearheading a blues revival with The Fabulous Thunderbirds to his longtime, innate fashion sense of slicked-back hair and sharp vintage threads (now seen throughout the pages of contemporary fashion journals) to becoming a premier designer of classic custom cars. But for Jimmie Vaughan, none of it is part of a crusade or a career plan. It’s just his natural way of living his life and pursuing the interests that have captivated Jimmie since his youth growing up in nearby Oak Cliff. Jimmie was weaned on classic Top 40 radio, vintage blues, early rock-and-roll, rhythm and blues, and the coolest jazz of the day on powerhouse Dallas AM radio stations, where personalities like Wolfman Jack sparked a youth revolution. After he was sidelined by a football injury in his teens, Jimmie turned to guitar and also began tutoring his young brother, Stevie Ray Vaughan, who would cite Jimmie as his biggest inspiration and influence throughout his amazing career. Before leaving the Fabulous Thunderbirds in 1990, Jimmie and Stevie teamed up to record Family Style, an album that reflected their mutually deep musical roots and maturing modern artistic sophistication. Just a few weeks prior to the album’s release, Stevie Ray died in a helicopter crash in Wisconsin. The tragedy devastated Jimmie, who retreated from touring and recording, though he continued to play guitar every day, as he has throughout his life. Meanwhile, the success of Family Style further enhanced Jimmie’s reputation as a distinctive musical stylist. He released his first solo album in 1994 and cemented his reputation as a master musician and eventually earned a Grammy for Best Rock Instrumental Performance. Jimmie’s style is deceptively simple, yet a complex attack on music that conveys a raw emotion that’s powerful and accessible. His approach has earned him guest appearances on recordings with artists that include B.B. King, Eric Clapton, Bob Dylan, Willie Nelson, Carlos Santana and Don Henley. Jimmie’s sixth solo album, Jimmie Vaughan Plays Blues, Ballads and Favorites, was released in 2010.