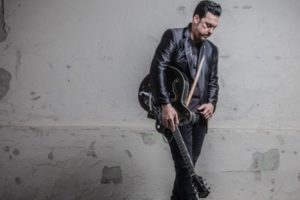 “If you open your arms to the world, it’s amazing what will come back atcha,” drawls East Texas native, singer/songwriter/filmmaker/author Jesse Dayton, who has a bunch more homespun wisdoms where that came from. A veteran of more than 30 years as a musician, Jesse was discovered as a young teenager playing in his hometown of Beaumont by legendary club owner, Clifford Antone, who booked him into his famed Austin venue, then immediately shifted him over to the honky-tonk, Broken Spoke, where the likes of Willie Nelson, George Strait and Ernest Tubb have had residencies. Equally steeped in Texas/Louisiana blues, old-school country and punk/rock, Jesse is the music world’s best-kept secret, hiding in plain sight as a guitarist for Waylon Jennings, Johnny Cash, Ryan Bingham and L.A. punk pioneers X, as well as touring alongside Social Distortion, the Supersuckers and John Doe. After releasing 11 studio albums and an EP as a solo artist, Jesse’s new album, Mixtape Volume 1, is a series of 10 cover songs he thoroughly makes his own, reinterpreting and revisiting them in a brand-new way. Jesse has more than 50 songs licensed to film and television, writing and directing what he calls a B-movie Roger Corman monster flick, Zombex, in New Orleans, featuring an eclectic cast including Malcolm McDowell, cult actor Sid Haig, Walking Dead’s Lew Temple, Corey Feldman, Slayer’s Tom Araya and X’s John Doe. His next project is writing his memoir and short stories for a book to be published next year, and he just finished playing guitar on Guns ‘N’ Roses bassist Duff McKagan’s new solo album.