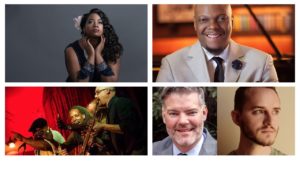 Dan Cavanagh is a composer and pianist who has garnered numerous awards in both areas. He received a 2009 gold medal prize from the International Music Prize for Excellence in Composition. In 2017 he was awarded a Special Judges’ Citation in the American Prize for Chamber Music Composition for his work for trumpet ensemble and drumset, Waves. As a composer Cavanagh has written or arranged for Latin Grammy-winning AfroBop Alliance, the legendary Patti LaBelle, and a wide range of classical and jazz performers across North America and Europe. His music can be heard on many other recordings both classical and jazz. He continues to be commissioned and programmed around the world. As the Executive Producer of UT Arlington Records, he spearheads a record label that involves students and faculty in all aspects of production and management of a recording project, from conception to release. Cavanagh is Professor of Music and interim Associate Dean for the College of Liberal Arts at the University of Texas at Arlington.

Multiple Grammy Award winner Shaun Martin is well known for his work with Kirk Franklin and as a key member of Snarky Puppy, his creative stamp can be heard on projects with musical legends Chaka Khan, Erykah Badu, Fred Hammond, Tamela Mann, Kim Burrell, God’s Property, and more. In 2015 Martin unveiled his debut album – 7Summers – to widespread acclaim, following up with a more succinct album of his Jazz piano work – Focus. His next album, Three-O, released in November 2020, and features the tight but explosive combination of Martin on keys, Matt Ramsey (Kirk Franklin) on Bass, and Mike Mitchell (Stanley Clarke, Spirit Fingers) on Drums. A native of Dallas, Texas, Shaun Martin’s  prodigious gift was noticed and nurtured at an early age; he began playing the drums and piano at the age of four. The supportive and musically rich Dallas community continued to nurture him, and he it – he joined God’s Property in 1993, leading to a Grammy and a long time working relationship with Kirk Franklin. As a music major at the University of North Texas, he joined fellow students in the ‘soon’ to be award winning, chart topping jazz fusion band Snarky Puppy, joining them on the road and in the studio as they forged a new independent path to success.

The hardest-hitting and most innovative brass band since 2015, The Big Ass Brass Band delivers everything from the roots of jazz and second-line to modern original tunes and everything in-between. And it’s all done full blast. Whether you want to dance, listen, or simply let the music take you somewhere, The BABB will get you where you need to go. They’ve brought their sound to Dallas, Shanghai, and every where in between. No matter what you’re looking for, when you’re with the Big Ass Brass Band, you can trust that it’s going to get funky.

Refreshing and beautiful are how many have described the voice and persona of Tatiana “LadyMay” Mayfield, a jazz vocalist, musician, composer, and educator from Fort Worth, Texas. “LadyMay” (as she has been named) has been singing and playing jazz music since the tender age of thirteen. Since then, she has performed in various venues and festivals throughout the U.S. and abroad, which in turn have earned her rave reviews from listeners and musicians in addition to numerous awards. In 2017, “LadyMay” was awarded 2nd place in the Sarah Vaughan International Jazz Vocals Competition held at NJPAC in New Jersey. In the summer of 2019, the city of Fort Worth awarded her with a “Legend In The Making” award at their annual “Dr. Marion J. Brooks Living Legends Awards” for her accomplishments in entertainment and education. Mayfield has opened for several well-known artists such as Kirk Whalum, Will Downing, Randy Brecker, Dave Valentin, Bobbi Humphrey, and The Main Ingredient. “LadyMay” has recorded three albums, From All Directions (2009), A Portrait Of LadyMay (2012), and The Next Chapter (2018).