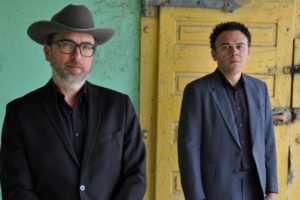 Join Greyhounds on Facebook Live at 8 p.m. for a concert right in your living room!

During or after the concert, we hope you’ll consider making a donation to support free music — with fewer concerts and fewer times to “pass the bucket,” the Levitt needs your help now more than ever!

Greyhounds are the Austin duo of Andrew Trube and Anthony Farrell. For the past two decades, Andrew and Anthony have been backing musicians (most notably as JJ Grey’s MOFRO), written songs for other artists (like Ruthie Foster and Tedeschi Trucks Band), recorded hundreds of bands in their own studio, Bud’s Recording Services, and toured all over the world together. To mark their 20th anniversary, Greyhounds are set to release Primates, their third studio record. Primates was produced by longtime friend and collaborator Steve Berlin (Los Lobos, Deer Tick, Grupo Fantasma). Steve helped the band channel their various influences of vintage soul, funk, and Texas rock ‘n’ roll into a direct, dynamic, shoulder-shakin’ strut of an album.