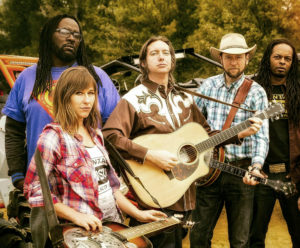 Gangstagrass is a dirty, fightin’, gator wrestlin’, foot stompin’, genre bustin’, Billboard chartin’, Emmy nominated team of Bluegrass Hip-Hop pioneers. Blending bluegrass and hip-hop may seem like an unlikely recipe for success, but don’t tell that to Rench, the mastermind behind the Emmy-nominated bluegrass/hip-hop outfit Gangstagrass. After settling in Brooklyn, Rench started recording MCs at Rench Audio Studios, his home studio. The rappers may have thought their sessions were finished, but Rench continued to experiment, combing the vocal tracks with samples of bluegrass, blues, and electronic beats. The result was a genre-demolishing blitz called Rench Presents: Gangstagrass. Known for the theme song to the TV series “Justified” and for giving you hope about America’s future. These rapping blue grass singing group will blow you away with their mash up of genres on stage.