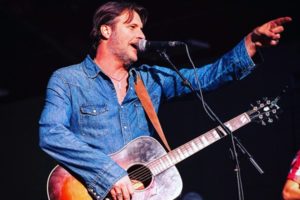 Texas-born musician, singer, songwriter and producer, Deryl Dodd, (known to his die-hard fans as “Double D”), has had a colorful career since entering the music scene in Waco in 1987. After four years of touring with several Texas bands, Deryl had the opportunity to open a show for legendary songwriter, Dean Dillon. Following the performance, he was invited backstage to meet Dean, where he complimented Deryl’s songwriting and arranged to meet with him in Nashville. After his 1991 visit, Deryl circulated through Nashville and found himself performing as lead guitarist and background vocalist for Martina McBride. This changed everything. Deryl soon was in demand — playing, recording and touring with some of the industry’s best. In 1995, Deryl signed his first recording contract with Sony Music and released his debut album, One Ride in Vegas, with his first hit single, “That’s How I Got to Memphis.” His second album produced the national hit, “A Bitter End,” and the title track of his third album, Pearl Snaps, reached number one on the Texas music charts. That was Deryl’s last album with Sony. He was ready to come home to Texas, where songwriters and musicians were creating a movement giving them the freedom to make music their own way. That’s where Deryl has been ever since, writing and recording music that keeps him on the music charts in the state he loves.