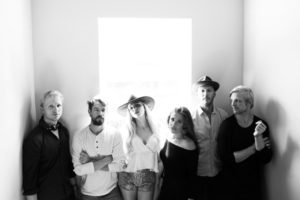 Six-piece band Delta Rae hails from Durham, N.C. Liz Hopkins and Brittany Holljes front the robust group with sultry harmonies rounded out by Brittany’s brothers, Eric (vocals, piano), and Ian (vocals, guitar), along with Mike McKee (drums) and Grant Emerson (bass). The band chose their moniker from a mythical story the Holljes siblings’ mother wrote about a Southern girl of the same name who summons the Greek gods to Earth. Headlining more than 100 shows each year and performing regularly on the festival circuit since forming in 2009, Delta Rae’s larger-than-life performances have earned coveted spots at Bonnaroo, Tortuga Music Festival, Austin City Limits, Firefly, Bumbershoot, Summerfest, Hangout Fest, Kaaboo, Basilica, VOODOO and Lollapalooza. They have received national attention first when their music was used on the HBO series, True Blood, then with features on NPR, the Washington Post and the New York Times in addition to late-night performances and being included in Forbes’ 30 Under 30 list. Delta Rae was recently named One to Watch in 2018 by Billboard magazine, Country Music Television and Rolling Stone. They are on tour with their latest release, A Long and Happy Life, and their latest radio single, “No Peace in Quiet.”