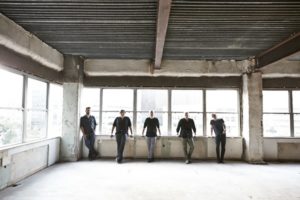 The band who took us to “Breakfast at Tiffany’s”

Texas-based dream-pop band, Deep Blue Something, is best known for their 1995 worldwide, smash-hit single, “Breakfast at Tiffany’s.” Although it’s been 20 years since “Breakfast at Tiffany’s” topped the charts, a whole new generation of fans has embraced the band since they’ve been included in popular films and TV series resulting in nearly 100 million streams on Spotify alone. After their initial success in the ’90s, Deep Blue Something took a long hiatus, then reconvened in 2016 to record the five-song EP, Locust House, which has now expanded into a full-length album. The group’s record label, Kirtland Records, has a roster that includes The Toadies, Sarah Jaffe and The Polyphonic Spree. The strength and focus of Locust House makes it hard to believe Deep Blue Something was on a 14-year hiatus. It’s also a logical progression for the band, demonstrating that they never lost the connection they built in their early days having “Breakfast at Tiffany’s.”