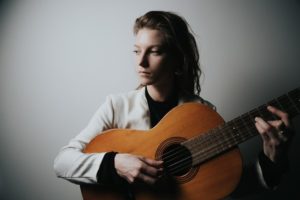 During or after Carson’s concert, we hope you’ll consider making a donation to support free music — with fewer concerts and fewer times to “pass the bucket,” the Levitt needs your help now more than ever!
Click to donate.

Years before Rolling Stone was praising Carson McHone’s rule-breaking roots music, the Austin native played weeknights in bars keeping dancers dancing and drinkers drinking. She pumped her music full of details from an early adulthood spent in the company of the heartbroken and high-toleranced. In 2015, Carson released Goodluck Man which earned her a cover story in The Austin Chronicle as well as the support of local icons like Ray Wylie Hubbard, who said she “writes songs like her life depends on it.” Then she hit the road with acts like Shakey Graves, Gary Clark Jr. and Joe Pug. Her songs’ lyrics are confessional and intensely autobiographical as she takes a hard look at the ways her worldview has been shaped. Purposeful, pointed and poignant.