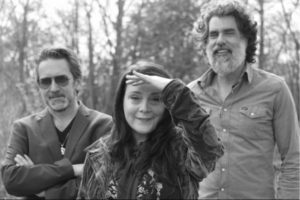 A musical force equipped with the soulful vocals of Janis and the guitar-slinging skills of Stevie Ray, Carolyn Wonderland reaches into the depths of the Texas blues tradition with the wit of a poet. She hits the stage with unmatched presence, a true legend in her time. Carolyn grew up the child of a singer in a band and began playing her mother’s vintage Martin guitar when other girls were dressing dolls. She’s gone from being the teenage toast of her hometown Houston to sleeping in her van in Austin amid heaps of critical acclaim for her recordings, Alcohol & Salvation, Bloodless Revolution, Miss Understood and Peace Meal. Along with the guitar and the multitude of other instruments she plays – trumpet, accordion, piano, mandolin, lap steel – Carolyn even throws in a whistling solo on occasion. Her breakthrough album was 2008’s Miss Understood. From appearances on Austin City Limits to top slots at major festivals around the world, Carolyn’s album quickly reached the Top 10 on Billboard’s Blues chart, and her live shows left a trail of screaming fans in its wake. Her 2011 follow up, Peace Meal, was produced by a stellar cast, including long-time supporter and inspiration, Ray Benson; two-time Grammy-winner, Larry Campbell; and founding member of The Monkees, Michael Nesmith. In 2015, Carolyn played her first-ever New Orleans Jazz Fest appearance, appeared on the Carson Daly Show, and released a live album, Live Texas Trio. Carolyn earned a Grammy Award nomination for Best Rock Performance Single, and her songs have been featured on NBC’s Homicide and Fox’s Time of Your Life. She has toured with acts like Buddy Guy and Johnny Winter, sat in with String Cheese Incident, Robert Earl Keen and Los Lobos, and has jammed with mentors and friends like Bob Dylan, Eddy Shaver and Ray Benson. She’s co-written songs with Ruthie Foster, Cindy Cashdollar, Candye Kane and Guy Forsyth. Carolyn is also the guitarist in the all-girl, southern rock band, Sis DeVille, and a founding member of the Austin Volunteer Orchestra.

For your health and safety
The Levitt has taken health and safety precautions to help make your visit to the lawn as safe as possible. Antibacterial stations are located by the restrooms and throughout the concert area. A cleaning crew will sanitize the bathrooms before, during and after concerts. Please do not attend concerts if you are not feeling well, have a temperature of 100 degrees or higher, or have been exposed to COVID-19.