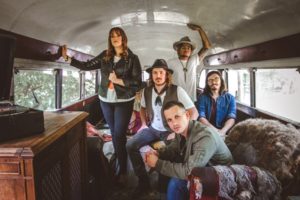 Blue Water Highway runs just outside of Freeport towards Galveston along the Texas Gulf Coast, where Texas and Louisiana cultures collide in a melting pot steeped in the traditions of both states. It’s here, in Lake Jackson, that Zack Kibodeaux and Greg Essington became high school friends. Their partnership included performing in musicals and local coffee shops, until they went their separate ways after high school. Soon, Zack was writing songs and sending them to his friend. Finally, Zack coaxed Greg back to Texas to form the band he had been hearing in his head. The two named themselves Blue Water Highway Band and began to create a sound as different as the region that they came from. They turned to Catherine Clark, an opera singer, to complete the three part harmonies that’s become the band’s signature. The band released a self-titled, six-song EP in 2013 and followed that up with a full-length LP, Things We Carry, in 2015. The band began touring and continues to define themselves as a live act built on excellent musicianship, great songs and a signature three-part harmony that sets them apart from their peers. They continue to explore new sounds and musical landscapes while remaining true to their roots along the Blue Water Highway.