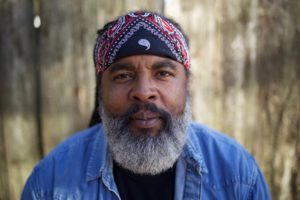 Join Alvin on Facebook Live at 8 p.m. for a concert right in your living room!

During or after Alvin’s concert, we hope you’ll consider making a donation to support free music — with fewer concerts and fewer times to “pass the bucket,” the Levitt needs your help now more than ever!

Known as a “musician’s musician,” Alvin Youngblood Hart’s praises have been sung by everyone from Bob Dylan to guitar gods Eric Clapton and Mick Taylor. Spending his formative years on the West Coast, in the Midwest and the Mid-South influenced Alvin’s wide-ranging musical perspective. Along with his 40 years of playing comes a nuts-and-bolts passion for the hardware of the trade. Alvin also is an electronics technician, a talent he picked up after seven years in the U.S. Coast Guard. His knack for quick-thinking repairs on the road has earned him the nicknames “The Garage Guerrilla” and “The Rock-N-Roll MacGyver” from fellow musicians. After two decades on the road, Alvin continues to delight audiences worldwide as a solo performer or with the eternally rockin’ Alvin Youngblood Hart’s Muscle Theory. The multi- award winner has played legendary venues like the Hollywood Bowl and Royal Albert Hall and has performed with Taj Mahal, the Allman Brothers and members of Thin Lizzy.